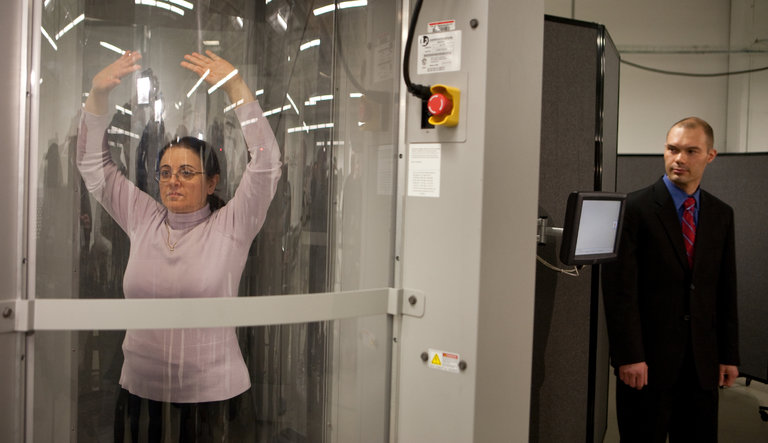 SAN FRANCISCO — The Department of Homeland Security is turning to data scientists to improve screening techniques at airports.

On Thursday, the department, working with Google, introduced a $1.5 million contest to build computer algorithms that can automatically identify concealed items in images captured by checkpoint body scanners.

The government is putting up the money, and the six-month contest will be run by Kaggle, a site that hosts more than a million data scientists that was recently acquired by Google.

Although data scientists can apply any technique in building these algorithms, the contest is a way of capitalizing on the progress in a technology called deep neural networks, said the Kaggle founder and chief executive, Anthony Goldbloom. Neural networks are complex mathematical systems that can learn specific tasks by analyzing vast amounts of data. Feed millions of cat photographs into a neural network, for instance, and it can learn to recognize a cat.

Companies like Google and Facebook use the technology to do things like identify faces in online images, recognize commands spoken into smartphones and translate one language into another. But the possibilities extend well beyond smartphone apps and other online services.

Earlier this year, Kaggle ran a $1 million contest to build algorithms capable of identifying signs of lung cancer in CT scans, helping to fuel a larger effort to apply neural networks to health care. Now, the hope is that neural networks can also help automated systems read body scans with greater accuracy, so checkpoint workers can spend less time pulling passengers aside and patting them down.

“We started by trying to figure out what was a dog and what was a cat,” said Goldbloom, referring to the growing community of companies, academics and other researchers working with neural networks. “Now, we’re moving into more serious territory.”

John W. Halinski, a former deputy administrator at the Transportation Security Administration who now works as a security consultant, welcomed the “crowdsourcing” idea because it could draw on the skills of any data scientist. This is increasingly important, he said, as airport security consolidates around just a few large corporations.

“There are a lot of people out there that are good at solving difficult problems,” said John Fortune, a program manager in the Department of Homeland Security’s science and technology arm.

Homeland Security and other organizations are working on ways to improve the technologies used at airport checkpoints, with the T.S.A. set to roll out new CT systems that can automatically identify items hidden in passenger baggage, and at least one company, Smiths Detection, exploring the use of neural networks at security checkpoints.

The daily Bits newsletter will keep you updated on the latest from Silicon Valley and the technology industry, plus exclusive analysis from our reporters and editors.

You agree to receive occasional updates and special offers for The New York Times’s products and services.

In theory, neural networks can accelerate the evolution of airport security, mainly because such systems can learn so quickly from data, relying less on individual rules and code painstakingly built by engineers.

The department is not sharing scans of the more than two million people screened each day at the nation’s airports. Instead, T.S.A. workers volunteered to help create the data for the contest from scratch, repeatedly walking through a set of test scanners at a laboratory in New Jersey. In some cases, the workers carried concealed items through the scanners, and these images are carefully labeled.

By analyzing this data, neural networks and other algorithms can learn to pinpoint concealed items on their own. Jeremy Achin, a founder and the chief executive of the data analysis company DataRobot, said that neural networks were well suited to such a task.

But he also warned that the technology could make mistakes and that in some cases it could be vulnerable to bad actors. Research has shown that after analyzing the performance of an image-recognition system driven by a neural network, miscreants could mark or otherwise alter items in ways that fool the system into seeing things that are not there — or failing to see things that are.

For those reasons, the immediate aim is not to build technology that replaces human screeners but to find a way of removing some of the burden from those screeners, Mr. Goldbloom said.

In the world of health care, researchers see deep learning as something that can augment the talents of doctors, not replace them. The same thinking applies in airport security, at least in the short term.

But the hope is that this technology and others, over time, will significantly improve this security-checkpoint task and others, including passenger baggage scans, cargo scans and face recognition.

“When identifying risk items in a piece of luggage or through a body scan, today’s algorithms aren’t bad,” said Anthony Roman, a former commercial pilot who runs the risk-management firm Roman & Associates. “But false positives will be driven way down. We may in the next 10 to 15 years reach a point where all this is automatic.”