NZN VIDEO
Armed police are on patrol near a church in south Auckland where a car drove through a fence.

Police are hunting for an armed man after he pointed a gun at officers in south Auckland.

The man led police on a car chase through Otara at 4.40am Monday morning, before crashing into a fence, pointing a firearm at police and fleeing on foot.

Police Inspector Wendy Spiller said a dog unit was deployed but was unable to locate him, and investigations would continue until the man was caught. 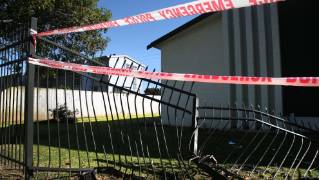 A car ploughed into a Seventh Day Adventist Church fence in Otara.

The car crashed through a fence in front of a Seventh Day Adventist church on Bairds Rd.

A staff member at the church, who asked not to be named, said she learned of the incident when she was phoned by another church member just before 7am.

“I was told there had been a police pursuit and as a result a guy had run into the fence.” 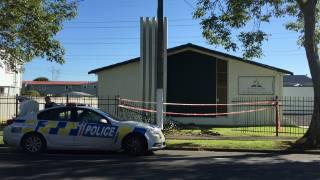 Several police units were called to the incident on Monday morning.

She said she was told a male driver then got out of the car and went to the back of the church on foot.

“When I arrived there were six armed police here,” she said.

“They were patrolling the area.

The car involved in the incident has been removed from the scene.

This incident comes little more than a week since a similar case where police had a gun pulled on them in south Auckland.

Armed men shot at a police car as they fled from a robbery of Mangere’s Idlewild Superette.

The getaway car was pursued by police, but the chase was soon abandoned after a shot was fired at a police car.

Three of the men then abandoned the car, and fled through the grounds of Rowandale School in Manurewa.

They ran across the school field and over a fence onto a neighbouring property.